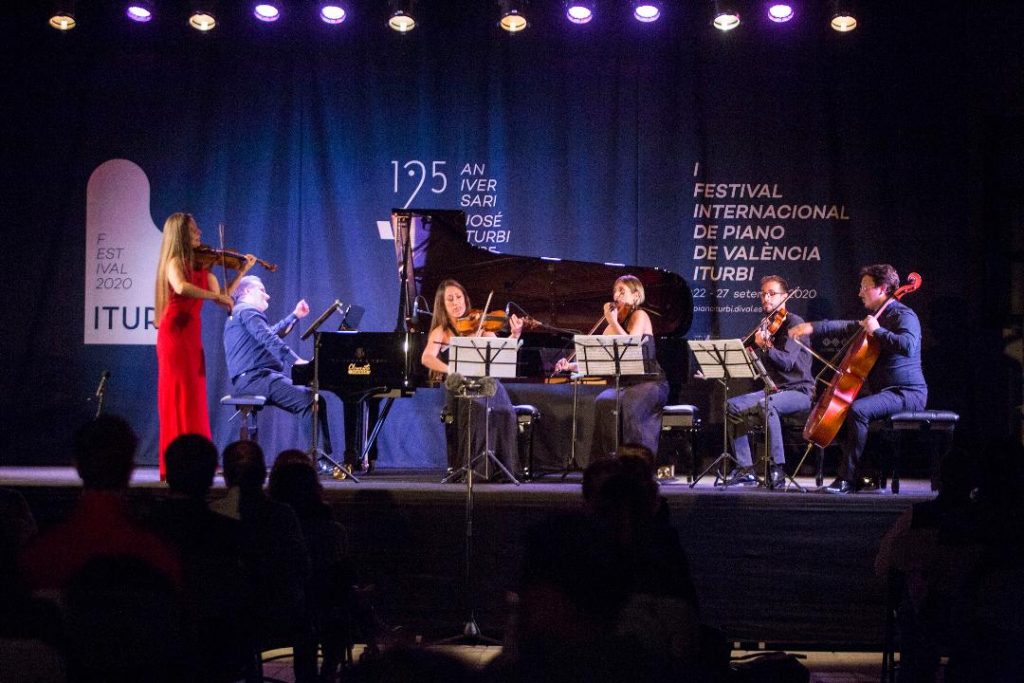 The Iturbi Prize, organized by the Valencia Provincial Government (Diputació) has selected 22 pianists to take part in the 21st International Piano Contest of Valencia, which will be held from 23rd June to 2nd July. The competition, which can count on the artistic management of Joaquín Achúcarro, has revealed the high level of competitiveness and how difficult it has been to draw up a shortlist of pianists who will be competing in the first phase.

Moreover, it is also worth noting that 178 pianists from 41 countries originally applied, which is six times the number of applications received in the previous competition, making the 2021 prize the most participative in its history, precisely in a year when this biennial music event is celebrating its 40th anniversary. This project is now exemplary in the world of piano and has seen performers attending from the five continents in its 20 editions held since 1981.

The jury, made up of Giselle Brodsky (the president), Josu de Solaun, Carles Marín, Thomas Schwan and Óscar Martín, has evaluated videos of the musicians signed up, who were all born as of 23 June 1985 and who sent a 25-30 minute audiovisual recording. The organizers have published a list of those accepted on the website (www.pianoiturbi.dival.es).

The pianists chosen to compete in person come from fifteen countries, particularly from Japan and Russia with three contestants each, and Germany, China and Italy with two each. Other nations that will be represented by performers at the Iturbi Prize are: Austria, Belarus, Canada, South Korea, the USA, Spain, Georgia, Kazakhstan, Sweden and Ukraine. By continents, there is a notable contingent of pianists from Europe, who account for 64%, whereas 27% are from Asia and 9% from America.

Glòria Tello, the councillor in charge of the Iturbi Prize, head of Culture in Valencia City Council and president of the Palau de la Música, congratulated the jury, enthusing that “they have done a difficult yet magnificent job in deciding which candidates will compete in the first phase of the Iturbi Prize”. Tello stated that “We can certainly be pleased with the amount of applications received and the quality shown by the pianists performing in the videos to take part in a very special year for the prize, which is celebrating four decades of the project”.

The councillor pointed out that “some very good people didn’t make it; it has been extraordinarily difficult for the jury to whittle it down to just 22 pianists out of the 178 signed up. We are thrilled with the excellence lined up for this year, and we encourage those who have not been selected this time to keep working with enthusiasm for the next edition, which will take place in 2023”.

After the shortlisting, the competition will next consist of five knock-out rounds in which the following works must be freely included: a sonata by Ludwig van Beethoven and Wolfgang Amadeus Mozart; two short works by Frédéric Chopin, one of which must be a nocturne; and a piece from Goyescas by Enrique Granados, from the Suite Iberia by Isaac Albéniz or Fantasía Bética by Manuel de Falla.

The first phase (from 23rd to 24th June) will involve the 22 performers selected; the second will bring this down to 16 (from 25th to 26th June), and the semi-final will see just 10 competing (from 27th to 28th). The first final phase will have six challengers remaining (29th to 30th) and in the grand final there will be only three (2nd July), in which the competitors will perform two concertos for piano with the Orchestra of Valencia in the Teatro Principal.

The cash prizes will be bigger for the competition’s anniversary, with a 70% increase over the previous contest. First prize will be worth €30,000, a CD recorded by the renowned record label IBS Classical and various recitals and concerts; second prize will win €20,000 and third prize €10,000. In the last edition, the prize-winners received €18,000, €12,000 and €6,000 respectively. The other participants who do not reach the grand final will receive €5,000, and a special award for the best performer of Spanish music is worth €2,000.

Furthermore, the Valencia Provincial Government (Diputación) will be organizing concerts in Spain and abroad throughout 2020 with the winners of the three first prizes taking part, and other special prizes will be awarded that are funded by entities and companies sponsoring or collaborating such as the Valencia City Council, Kawai, Clemente Pianos and the Societat Filarmònica de València.

PrevPreviousSix-fold growth in registrations for the Iturbi Prize with 178 pianists competing from 41 countries
NextThe pianists Sychev , Jordania and Suzuki triumph in an Iturbi that declares the top prize vacantNext
PARTNERS