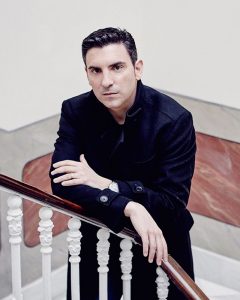 Prize-winner in more than 40 piano competitions including those of the Academia Mozarteum and the Scarlatti Preis in Salzburg, Baltic in Poland, Panama City, Città di Marsala, Flame in Paris, Virtuoso Prize in Rotterdam, Yamaha Foundation of Europe, José Iturbi in Valencia, Manuel de Falla in Granada, Ibiza and Frechilla-Zuloaga. His famous “Piano Fire” CD (Nibius, 2016) received the Melómano de Oro award and was Ritmo CD of the month.

Resident piano teacher at the Escuela Internacional Musical Arts, Madrid. Carles is also often invited to give master classes in different European cities. He will soon be joining the Miami International Piano Festival Academy at the invitation of Giselle Brodsky, Marín’s mentor.

He has trained with such outstanding names as Joaquín Achúcarro and, more recently, Edna Golandsky. He has also been advised by Alicia de Larrocha and Zubin Mehta.